Marc Nagtzaam has been producing a body of work that is based on one main subject: the idea of pattern, the repetition. He draws lines, grids, circles, words or sentences as in an endless search for collecting pieces of information. The repetition and the graphic structure of his works seems reminiscent of minimal and conceptual aesthetics. Most of Marc Nagtzaam´s drawings consist of colourless, darkly filled in graphite surfaces. Abstracted elements from architecture, graphic design, details from found photographs, or parts from previous drawings are starting points for every series of works. This source material is being reduced, with basic, elementary means: dots, lines and flat surfaces, to construct a sort of structure. As Nagtzaam himself points out: “I’m looking for representations of a (seemingly) concrete reality as well as I search for images which can only exist as a drawing.”

Next to his drawings Nagtzaam regularly produces artist books. In 1998, Marc Nagtzaam’s book (SOME), a collection of his text drawings, and made in collaboration with designer Roger Willems, marked the beginning of Roma Publications. With whom he continued to work with up until now.

More recently Nagtzaam started experimenting with digital collages. In 2015 this resulted in the publication Zeichnungen, This artist book consists of a compilation of his drawings - or rather, ‘sketches of drawings’. He combined this material by printing it in different layers on a Riso duplicator at the Charles Nypels Lab in Maastricht. The result is a careful composition of previously unpublished drawings that became a new work in itself.

1b: The practices of routinized Modernism and the fragile reactions against it. 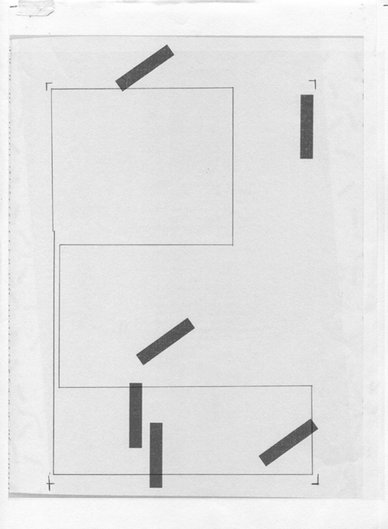 7b: At this point everything turned into a projection